The 2014 Integrated Water Quality Assessment Report is the latest edition the state’s assessment of how NJ waters are being used. The 2016 integrated report is still being finalized as of this writing, and the 2018 edition is just getting underway.The full 2014 report is 771 pages long and much public feedback goes on, so the time involved in production of these biennial reports is necessarily protracted.

But we can learn something from the 2014 Executive Summary:

The Environmental Protection Agency says that states hoping to meet the parameters of the Clean Water Act should design state water monitoring systems that answer the following five questions:

1. What is the overall quality of waters in the State? Under Section 305(b) of the Act, the State determines the extent to which its waters meet the objectives of the Clean Water Act, attain applicable water quality standards, and provide for the protection and propagation of balanced populations of fish, shellfish, and wildlife (40 CFR 130.8).

2. To what extent is water quality changing over time? The State assesses and reports on the extent to which control programs have improved water quality or will improve water quality for the purposes of “. . . the protection and propagation of a balanced population of shellfish, fish, and wildlife and . . . recreational activities in and on the water” (40 CFR 130.8(b)(2) and 130.8(b)(1)). Under Section 319(h)(11) of the Act, a State with Section 319 grants reports on reductions in nonpoint-source loadings and related improvements in water quality. Under Section 314(a)(1)(F), a State reports on the status and trends of water quality in lakes. The State may address these requirements through the use of models (for load estimations) and by tracking trends in use assessments. The State also should be able to identify emerging environmental issues related to new pollutants or changes in activities within watersheds.

3. What are the problem areas and areas needing protection? Under Section 303(d), the State must identify impaired waters. The State should also identify waters that are currently of high quality and should be protected from degradation. In order to protect and restore waters, State monitoring and assessment programs should identify the causes and sources of impairment.

4. What level of protection is needed? The State establishes the level of protection that is being monitored against. For example, the State uses data from monitoring programs to conduct triennial reviews of state water quality standards, conduct use attainability analyses, develop and adopt revised designated uses and water quality criteria, establish water quality-based effluent limits in NPDES permits, establish total maximum daily loads, and assess which levels of best management practices for nonpoint sources are most appropriate. 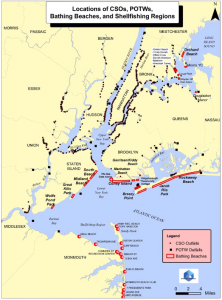 Monmouth County has dedicated sewer pipes, while NY and NJ communities north and west of us combine stormwater with their sewage (black dots, map). Combined sewer systems are designed to spew effluent unprocessed directly into waterways when rain or snow melt overwhelm associated sewage treatment plants. When constructed, combined sewer overflows (CSOs) were deemed a preferable method deal with sewage backups rather than having sewage spill into homes, businesses, and public streets. However, the raw sewage discharged into waterways north and west of Aberdeen Township ends up in the Raritan Bay, polluting swimming beaches (red dots).

The New York and New Jersey Harbor and Estuary Program has identified CSOs as a critical regional environmental issue to be addressed over the next five years.

Read more on CSOs at the NY/NJ Baykeeper.

One of the hidden wonders of the Township of Aberdeen (map below) is its network of creeks bringing life and beauty to our area. You probably cross several of these water courses when you are out for a walk or a drive and don’t even notice them. 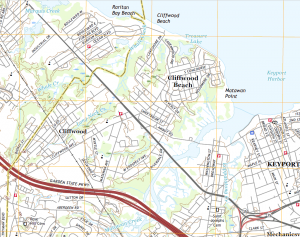 Our creeks are an important feature of our wonderful community and need your help and that of your family to remain clean and safe. What can you do?

Aberdeen’s creeks (listed below) all feed into the Raritan Bay, which is in the NJ Department of Environmental Protection’s (DEP) Watershed Management Area 12 (WMA12). 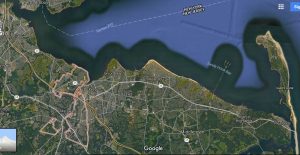 Aberdeen Township is outlined above on this satellite image of the Raritan bayshore.

Tributaries from Marlboro and Old Bridge townships join together in Freneau Woods Park, where they form the headwaters of Matawan Creek. The creek feeds Lake Lefferts, a manmade lake formed in 1928 when Matawan dammed the creek. A spillway under Ravine Drive releases some of the water from the dam, allowing the creek to continue on its way.  A tributary out of Marc Woods joins the creek, which meanders west of Main Street into a large marshland. Waters from nearby Lake Matawan’s spillway pass under the road and feed the creek. A small tributary along Aberdeen Road joins the creek just before it flows under a bridge and through conduits under the NJ Transit railroad tracks just west of Matawan Station. The creek then meanders west of Lower Main Street, passes under the Garden State Parkway, forms a large wetland east of River Gardens, passes under Route 35 and the bridge connecting Amboy Avenue and West Front Street in Keyport, then flows past Matawan Point into Keyport Harbor on Raritan Bay. 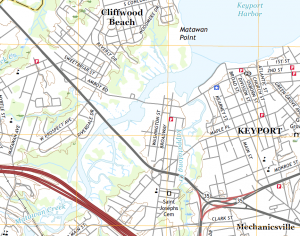 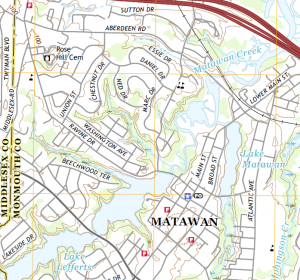 A 1686 East Jersey land grant, which established the section of Matawan known as Warne’s Neck, referred to Matawan Creek as Mittevange, Nachenkine, and Nashonakime creek. Scots Presbyterians claim to have landed at Matawan Creek around that time. They soon established congregations in nearby Wickatunk, Potanamus, Tennent and Mount Pleasant.

Although small, the creek was once navigable by commercial shipping as far as Dock Street in Matawan. Area farmers sold fruits and vegetables across the bay at New York City markets and restaurants. Passengers shopped for clothing and furniture in the city and traveled to Red Bank and Asbury Park for recreation.

The movie “Jaws” was based in part on the 1916 shark attacks at Dock Street on Matawan Creek.

Whale Creek begins near the juncture of County Road and the Garden State Parkway in Cliffwood, goes under Route 35 between County Road and Ocean Boulevard in Old Bridge, and makes its way to the Raritan Bay. It is the waterway you see from the new baseball field adjacent to the Splash Park, or when you are parked in the fishermen’s lot at Cliffwood Beach. A bridge over it joins the two Cliffwood Beaches, between Lakeshore Drive in Aberdeen and Ocean Boulevard in Old Bridge. Whale Creek forms the border between Middlesex and Monmouth counties. 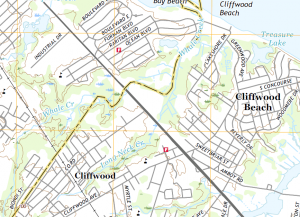 It wasn’t so long ago that Route 35 routinely flooded at Whale Creek, between County Road and 7-Eleven in Old Bridge. Snarled traffic would be redirected to Laurence Harbor Parkway at one end and County Road at the other. NJ Department of Transportation (NJ DOT) funded road construction a few years ago that raised the roadway and added larger conduits to aid the creek’s flow underneath it significantly improving transit in the area.

Long Neck Creek starts in Midland Park near Rose Street in Cliffwood, passes under Route 35 between Cliffwood Avenue and County Road, and joins Whale Creek on its way to Raritan Bay. 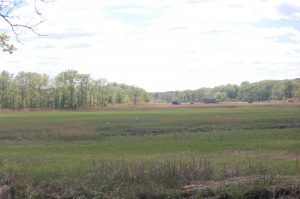 Southward view from the Kavanaugh Trail of the Long Neck and Whale creek wetlands with Route 35 in the distance. 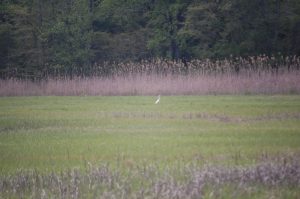 Western view from the Kavanaugh Trail over the Long Neck and Whale creek wetlands towards Old Bridge Township. 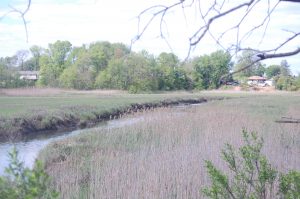 Northwestern view from the Kavanaugh Trail of Long Neck Creek as it approaches Whale Creek bridge. 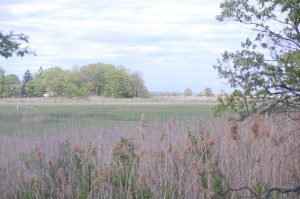 Northern view from the Kavanaugh Trail of the Long Neck and Whale creek wetlands towards Ocean Boulevard and the Raritan Bay.

You can see this waterway up close from the Kavanaugh Trail. Carefully climb a large mound where Cliffwood Brick Company (CBC) excavated clay long ago and enjoy a view overlooking the vast marshlands between the Splash Park and Route 35. You might see Great Egrets (second image above), Great Blue Herons, Clapper Rails (two images below), Osprey and even Bald Eagles. 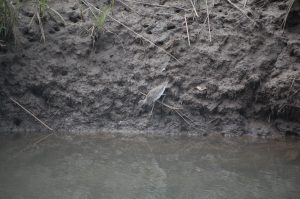 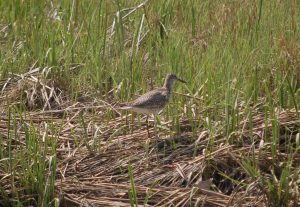 Clapper Rail atop the wetlands of Long Neck Creek.

Clapboard Creek, a small but significant tributary of Matawan Creek, starts near Locust Street in Cliffwood, parallels Grove Street and West Prospect Avenue, travels under Matawan Avenue and Route 35, then turns south to join Matawan Creek near the Route 35 bridge. Your best view of the creek is from Aberdeen-Matawan Middle School (MAMS). 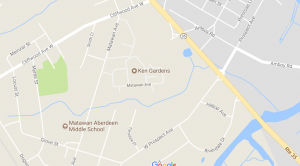 A small, inaccessible pond adjacent to Quality 1st Basement Systems and across Route 35 from Wendy’s is fed by this Matawan Creek tributary.

Mohingson Creek, also known as Wilkson Creek, starts in Mount Pleasant Hills in Holmdel, crosses under South Beers Street and Line Road, runs along Ivy Hill Drive, crosses under Lloyd Road, and passes alongside Cypress Lane. It crosses under Church Street into Matawan, passes between Matawan Regional High School and Deerfield Lane, under the railroad tracks east of the Aberdeen-Matawan train station, under Lower Main Street and the Garden State Parkway (below, upper image), then feeds into Matawan Creek near River Gardens on its way to Raritan Bay (below, lower image). 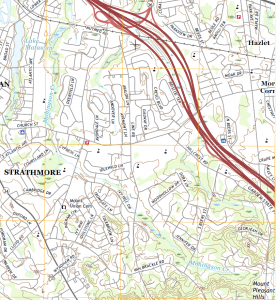 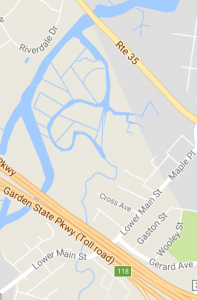 Another source says the Mohingsons were local Lenni-Lenapi who lived on the lands later known as Lydia Bowne’s 500 acres. They reportedly buried their dead near the site of the AME Zion Church in Matawan. (Source: “This Old Monmouth of Ours,” William S Hornor, page 190)

Luppatatong Creek originates in Holmdel and passes through Hazlet on its way to Keyport, where famous oyster beds and fisheries once flourished. A tributary of the creek starts in the Oak Shades section of Aberdeen and joins the Luppatatong in Keyport. 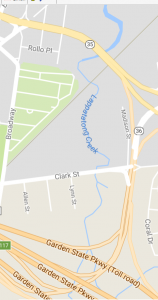 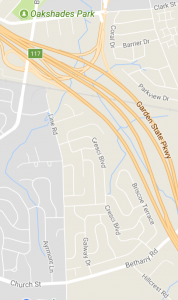 A tributary originates near Ayrmont Lane in Strathmore and joins Luppatatong Creek at the Garden State Parkway (GSP) (above, lower); the creeks unite at the GSP and head into Keyport (above, upper).

The name of the creek originated from the Native Americans who lived in this area. Luppatatong Creek was first reported in a colonial land patent in 1687 as Lupakitonge Creek. The US Board of Geographic Names settled on the current spelling in 1901, ruling out variations such as Luppatcong, Lupatcong and Lupatatong. Google Maps shows it incorrectly as Lappatatong.

Most or all Gravelly Brook passed through what was then Matawan Township until 1933, when a referendum resulted in the annexation of parts of Freneau by Matawan Borough.

Tributaries of Gravelly Brook now run on two sides of Fordham Drive in Strathmore, then move briefly into Matawan and then back again into Aberdeen. At Church Street, the brook joins Lake Matawan, the southern part of which is in Aberdeen, the remainder in Matawan. (The lake is between Atlantic and Broad Streets.) 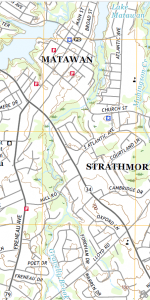 The best view of the brook is from Gravelly Brook Park off Route 79 in Matawan. Optimum views of the lake are from the Lake Matawan dam on Main Street and the Little Street bridge, each in Matawan.

Lake Lefferts crosses under Routes 516 and 34. The best views of the lake are from the Buttonwood Manor on Route 34 and Ravine Drive in Matawan. 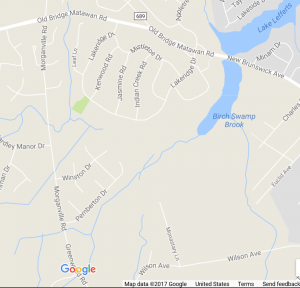